A pine cone is an organ of the pine tree containing its reproductive structures. Pine trees are only one of the conifer, or "cone-bearing," plants; others include cedars, firs, cypresses, and redwoods. Pine cones, like the reproductive organs of other conifers, come in male and female varieties.
Pine nuts (Chilghoza) are an edible seed, found inside pine cones.
In Pakistan, Chilgoza is found in the Khyber Pakhtunkhwa and Baluchistan Provinces, Murree and Kotli Sattian hills in the Punjab province, the Northern Areas (Gilgit Agency) and Kashmir. Chilgoza pine is a hardy tree and can endure excessive drought, high winds, and severe cold in the winter. Nearly 20 percent of the Pakistani forests comprise of Chilgoza trees. 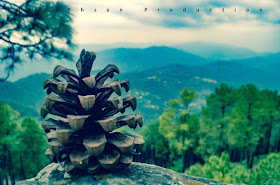 Pakistan is among the world top pine nut producers. In season 2015/2016, Pakistan produced 3,000 MT(kernel basis) of pine nuts, equals to that in previous season, representing 15% of the global production. China remained the largest pine nut producer despite the sharp decrease, with a crop of 5,000 Mt, accounting for 26% of world production. The second largest producer is the Russian Federation (4,050 MT, 21% share), followed by North Korea, Afghanistan and Pakistan (3.000 MT, 15% share). Pakistani pine nuts were exported to China, US, UK, Scandinavian countries, Middle East and Europe. 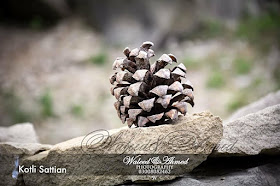 Pine tree is very slow growing. In year 2013, it was assessed as Near Threatened (NT) species under IUCN red list (IUCN, 2015). The Chilgoza forests of Sulaiman Range are the world’s largest pure stand covering a total area about 260 km2. This forest provides habitat to the Markhor species which is also endangered under IUCN red list. The forest has provided an essential source of livelihoods for local communities and has the potential to reduce soil erosion.
However, the forests are under great threat due to uncontrolled cutting and extensive grazing on land. Communities cut down trees for space, for fuel and for livelihood. Middlemen make huge profits while locals earn little. Therefore they resort to cutting trees for timber rather than collecting nuts. As demand grows, pine nuts are increasingly collected unsustainably. Instead of leaving a few cones thus allowing natural regeneration, communities gather all the cones they find.
NaturePakistan (WWF) has set up a project to cut out the middlemen who buy chilgozas from villagers. Also the harvesters get 2000 rupees for each tree they fell currently, but there is now a 10,000 rupee fine for cutting down a young tree.